The fixture for the 2022 Suncorp Super Netball season has been released, with a Grand Final rematch to headline round one.

Grand final redemption will begin in round one for the GIANTS, with a 2021 Grand Final re-match against the Swifts set to headline the opening round of the 2022 Suncorp Super Netball Season.

In a new timeslot of 7pm on Saturday, April 2, Ken Rosewall Arena is expected to host a sell-out crowd when the Swifts host the GIANTS as Super Netball returns to the state for the first time since round eight, 2021.

The GIANTS will then head to Adelaide to take on the Thunderbirds before a clash against former GIANT Kiera Austin and her new team, the Melbourne Vixens, in round three in Melbourne.

Round four will see the GIANTS host their first home game of the season when they take on the Queensland Firebirds on Tuesday, April 12 in the first week of the school holidays.

Back-to-back weekends at Ken Rosewall Arena (KRA) will see the GIANTS take on the Magpies on Easter Saturday, before hosting the Fever in an ANZAC weekend match on Sunday, April 24.

A clash against the Sunshine Coast Lightning at USC Stadium in Queensland will bring up the half-way mark of the season.

The GIANTS have you sorted for Mother’s Day as the GIANTS host the Swifts in the second Derby of the season on Sunday, May 8.

The GIANTS will play rounds 9 and round 12 at home against the Vixens and Thunderbirds, with round 14 against the Lightning also at Ken Rosewall Arena to close out the regular home and away season.

Interstate members will get to see the GIANTS live across the country, with the GIANTS playing in Adelaide, Melbourne, Sunshine Coast, Launceston, Perth and Brisbane in 2022.

GIANTS Executive General Manager, Tim Underwood, said the 2022 fixture is one for all GIANTS Netball fans to look forward to.

“While not a GIANTS home game in round one, the Grand Final rematch will be quite the spectacle for all netball fans in NSW to enjoy,” Mr Underwood said.

“Hosting games during the school holidays, ANZAC weekend and Mother’s Day, along with the new time slots, provides some really exciting opportunities to deliver world-class match day experiences and attract new fans to our game.

“The past two seasons have been tough for both the players and members, and we can’t wait to welcome everyone back to the netball and turn KRA orange in 2022.”

The GIANTS’ 2022 fixture doesn’t include a game in the ACT, with AIS Arena still closed and no other venues suitable for Super Netball.

“We are disappointed to not be able to play in Canberra, given our connection to the community down there,” Mr Underwood said.

“AIS Arena is still not taking bookings and yet again we have explored alternatives but unfortunately there are no suitable options.

“We hope that our ACT-based fans will get the opportunity to join us for a game in Sydney in 2022.”

The GIANTS will play all home games at the new Ken Rosewall Arena in Sydney Olympic Park with the season to kick off on March 26. It will wrap up prior to the 2022 Commonwealth Games in Birmingham, which will be held from July 28 to August 8.

Memberships are currently on sale and the best way to guarantee your seat and enjoy the experience. 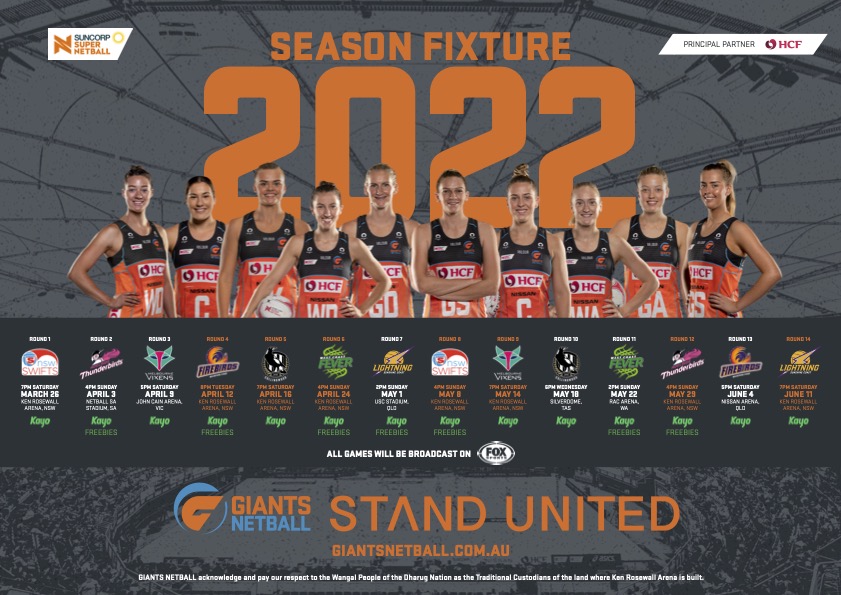